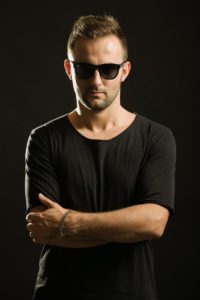 When Andy Leka hits the decks, the party is on. His energetic vibe, feeling for the crowd and his party mode established quite a name in the circle of DJ’s in Italy and Switzerland in his early years. Nowadays he gets to export this to a greater deal of countries. As a resident of Rimini’s well known Life Club, where he’s been working since 2003, Andy Leka always played the big parties. In the off-season of Rimini, Andy Leka DJs at festivals all over Italy and other countries like Switzerland, Spain, The Netherlands and Germany. In 2009 Andy became resident DJ of Saint Trop Club in Thun, Switzerland. His most recent 2013 tour in the Spanish costas became a successful exercition.

In 2013 Andy Leka released his tracks ‘Otter’ and ‘Tonik’ on Black Hole Recordings imprint Avanti. He also did a remix for the huge Italian hit ‘It’s Time’ with Elton Jonathan Kroon. More releases are planned, which makes Andy the multitalent the crowd takes him for. He has been on stage with big names like Roog, Afrojack, Don Diablo, Benny Rodrigues, Gregor Salto, Sunnery James, Ryan Marciano, Ricky Rivaro, Chuckie, Billy the Kit, Partysquad, DJ Antoine, Bobby Burns and many more.