About the Artist:
Imishango is a Surinamese born singer and poet currently residing in Amsterdam, Netherlands.
His lyrics are rooted in the struggle for truth, rights, and self-determination. This universal
message is the cornerstone of reggae music, which his father exposed him to at an early age,
and is a pivotal force in his life. He grew up listening to foundation artists like Bob Marley,
Gregory Isaacs, Peter Tosh and Culture.
Artists of his generation like Buju Banton and Capleton, started as dancehall artists and made
the transition to Rastafari. This led him on a path to reading, soul searching and finally making
his own shift to becoming Rasta.
Along with Buju Banton and Capleton, Sizzla, Garnet Silk, Luciano & Anthony B are some of his
musical influences. Going to Buju’s concert at the Paradiso in Amsterdam was a turning point.
Seeing his energy level and the crowd interaction was the moment Imishango started
envisioning himself performing on stage one day.
He has performed at festivals and venues throughout Holland, Belgium and Germany. He has
collaborated with Gideon Grounds, Rootz Controllers and The Unstoppable Force who are all
part of the local musical community.
He is currently producing his full-length album set to be released in Summer of 2022. Some of
the musicians on this project include guitarists Dinesh Badri & Jair Wix, keyboardist Vinny Bihar,
percussionist Ras Maikey, backing vocalists Vannessa Marcia & Lory Soares, organist Metch
aka Keys Buster, and Bass Guitarist Richard Adelij aka Bussy Bigs.
Background:
Imishango is very involved in natural, organic farming and it is a mission of his to return to his
community in Suriname to work the land he comes from on a full-time basis.
His sister, who he lost to cancer 15 years ago, was very motivational in his life. She encouraged
him to write poetry which became an entry point into music. She also inspired him to choose
veganism out of solidarity for her, and has maintained this lifestyle ever since.
Being able to connect his poetry with making music was pivotal. It was through an unanticipated
studio session with a friend that he co-wrote lyrics for and he ended up singing the song they
went into the studio to record. And the rest is history.
“I grew up listening to foundation artist like Gregory Isaacs, Peter Tosh, Culture, Bob Marley and
others before Buju Banton and others of my Generation
Short Bio:
Imishango is a singer-poet born in Suriname and residing in Amsterdam. Reggae music has
been a pivotal force in his life, and naturally it is the backdrop for the songs that he writes. 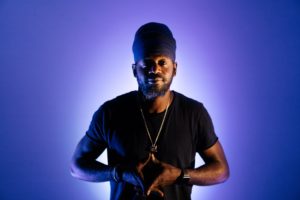